Welcome to the About the Show section of our site! Here, you can find information about the show's origins, voice talents, and whatnot.

Unlike most Nickelodeon cartoons, which generally end with a movie, Jimmy Neutron began with one. Jimmy and his friends made their grand debut in the feature film Jimmy Neutron: Boy Genius. 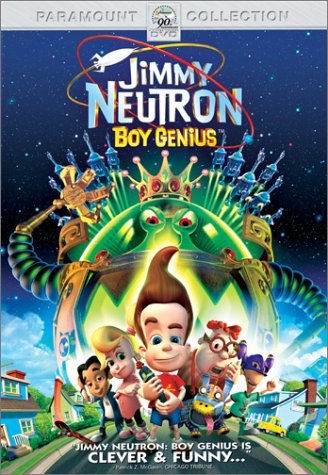 The film, released in 2001, did well in the box offices, with the tagline "Blasting Into Theaters". It was animated using Lightwave 3D and Messiah Studio (Lightwave was also used in such famous films as Jurassic Park, Titanic, The X-Files, and Iron Man). Written by John A. Davis and Steve Oedekerk, the movie introduced Jimmy, Sheen, Carl, Libby, Cindy, and a number of other side characters like Nick Dean and Jimmy's parents. For those who haven't seen the film, here's a quick plot summary: after every single adult in town is abducted by the 'Yolkians', a group of hostile, egg-themed aliens, the kids build a fleet of intergalactic starships and set off to rescue them. The movie is brimming with typical Jimmy Neutron humor, and a cute naiveté that is lacking in the television series.

After the success of the movie, Jimmy Neutron blasted onto Nickelodeon with the show we all are familiar with: "The Adventures of Jimmy Neutron: Boy Genius". The show ran from 2002 until 2006, for a total of 3 seasons. Members of the production crew have stated that its eventual cancellation was due not a lack of viewership, but rather because of budget concerns, since episodes were costly to produce and Nickelodeon didn't want to foot the bill anymore. Money can't buy great TV, though, and to this day the series maintains an 8.5 rating, or "great" rating on tv.com. A spinoff series, "Planet Sheen", aired in 2010, but was canceled after only 1 season thanks to its low popularity (its tv.com rating is 4.9, or poor).

The Adventures of Jimmy Neutron boasted a number of talented and widely-known voice artists.

Directed by:
Produced by: Written by:
Original Music by: